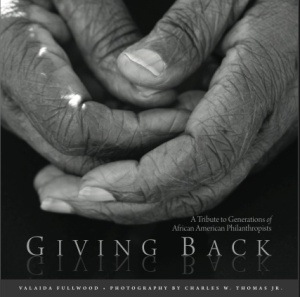 “’To whom much is given, much is expected.’

This Biblical passage from the Gospel of Luke conveys a belief that I and many of my African American family and friends hold dear… We are acutely aware of what others have given up to pave the way and contribute to our successes. As a result, we share a sense of responsibility about honoring and sustaining that legacy…

While this cultural legacy of giving back prevails today, it is often overlooked by mainstream society and rarely celebrated within the African American community… Media coverage and reports of prominent philanthropic leaders and institutions advance a false view which places African Americans only on the demand side, not the supply side of philanthropy.

The truth of the matter: African Americans give 8.6% of their discretionary income to charity—more than any other racial group in America.” — Excerpted from the Preface (pgs. xviii-xix)

Cultivated by ancestors in Africa for ages, black folks’ spirit of philanthropy was ingrained way before their arrival on these shores. During the slave days, it was evident in the altruism of fugitive Harriet Tubman who risked recapture to help others in chains find their way to freedom via the Underground Railroad.

Such behavior has basically been the rule, rather than the exception, for a people whose very survival has often depended on selfless displays of compassion towards the least of our brethren. For, as mentor Michael Sales points out, “What’s most remarkable is that even as we help those who are at risk, we ourselves are often at risk at the same time.”

This attitude persists despite the still precarious position of those African-Americans living above the subsistence level who have managed to extricate themselves from poverty. Giving Back is an uplifting opus celebrating the generosity of charitably-inclined blacks, a touching tribute told in portraits, proverbs, anecdotes and micro-biographies.

The book is the brainchild of idea whisperer Valaida Fullwood who collaborated with award-winning photographer Charles W. Thomas, Jr. to create a visually-captivating, coffee table book chock full of intimate homages to unsung heroes as well as inspirational sayings like the sage notion courtesy of Frederick Douglass that “It is easier to build strong children than to repair broken men.”

An overdue salute to an underappreciated segment of African-American society.

The Sly Fox Film Reviews publishes the content of film critic Kam Williams. Voted Most Outstanding Journalist of the Decade by the Disilgold Soul Literary Review in 2008, Kam Williams is a syndicated film and book critic who writes for 100+ publications around the U.S., Europe, Asia, Africa, Canada and the Caribbean. He is a member of the New York Film Critics Online, the NAACP Image Awards Nominating Committee and Rotten Tomatoes. More at: www.kamwilliams.com

Advance commentary on Giving Back can be found here.