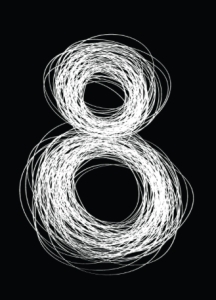 The number 8 in the Bible represents a new beginning—meaning a new order or creation—and, in general, a numeral rich in symbolism. I’m alert to the fact that last week marked eight years since the idea for Giving Back came as a gift to me while at a conference in Seattle. The Giving Back Project launched that night, if only in my imagination for the first few months. Since April 2007, a lot has occurred. Gully lows. Mountain highs. Jagged trails. Leaps of faith. Dreams realized. Some deferred. And still constant aspiration and so much more to do.

In its eighth year, the Giving Back Project is indeed set to begin again with Giving Back: The Soul of Philanthropy Reframed and Exhibited embarking on a national tour to museums and galleries at public libraries and colleges. In hopes of never forgetting the struggle, strength and striving that delivered me and the project to another new threshold, I’ve posted below the “Author’s Notes” from Giving Back, which I wrote while filled with gratitude just before the book was published.

Author’s Notes from Giving Back

Grace is a gift always welcome. And I was showered with grace while developing Giving Back. When I first conceived of the idea, zeal and naivety blinded me to its magnitude. I thought it would take a year to develop the book; instead it led me on a four-and- a-half-year odyssey that proved both torturous and joyous.

At times, doubts would swarm with stinging questions about whether the vision was attainable. I questioned whether I was up to the sacrifices and risks that seeing it through seemed to require of me. People I spoke with believed in the project; they saw the significance of documenting authentic stories and producing a socially relevant book. This helped fend off some of my fears. Even with dispiriting episodes, I could never suppress for long the call of these stories.

Interviewing people was a privilege and extraordinarily gratifying; yet the gravity of the undertaking weighed heavily on me too. Each set of interview notes seemed so delicate. I gained deeper recognition of how precious each story was and how potent it could become if I possessed the wherewithal to craft a compelling body of work and get it in front of readers.

I felt like a surrogate entrusted to carry not one but scores of seeds, each exceptional, fragile and bundling possibilities. Humbled and often daunted, I knew I had to take care in crafting each story with due reverence. Demanding equal finesse was clearing an uncertain path to bring the book’s narrative and photographic content out of the obscurity of our families, our communities and my laptop into the light of the wider world. Guidance, often from unexpected people and places, came at each crossroad.

Always brightening the journey were the hopes and confidence expressed by family, friends and giving circle members. I remember the excitement of Ohmar, Renee and Rashad when they first heard my idea while on a road trip to a Black philanthropy conference. I think about Aunt Dora’s smile upon learning she inspired the book. I recall early conversations with Charles about my vision and the alignment of our artistic aspirations. Collaboration with Charles has been a God-sent steadying force, from his initial blind faith in the project to his ease, professionalism and quiet generosity.

The most beautiful gift while writing this book was being immersed in its content. I couldn’t help but become re-inspired when each day required me to delve into literally hundreds of narratives and photographs meant to inspire and motivate —I call it chicken and dumplings for the giver’s soul. Gratitude bubbles over when I look back on the gracious acts that brought Giving Back into being. Without a doubt God’s grace is greatest, but grace granted by the people around me was wonderfully sweet too.

And ye shall sow the eighth year, and eat yet of old fruit until the ninth year; until her fruits come in ye shall eat of the old store.  Leviticus 25:22

1 thought on “Struggle, Strength and Striving”