Alternately astonished, agog, giddy, daunted, delighted and more, my mind has been an emotional carousel since the release of my book Giving Back: A Tribute to Generations of African American Philanthropists. News that book critic Kam Williams recently listed Giving Back among the 10 Best Black Books of 2011 set my head spinning deliriously and it hasn’t slowed yet.

The fact that a homemade (i.e., independently published) book by novices merited ranking among those of seasoned authors and publishing house giants is remarkable, to say the least. While I set my sights sky high from the outset and then joined with others to pour my soul into producing a compelling book, uncertainty loomed over whether Giving Back would garner extensive national attention, however well done or worthy. 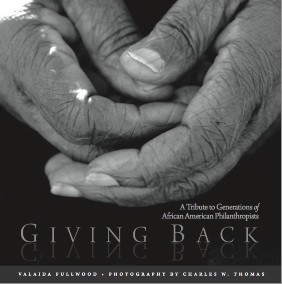 Giving Back is presently a contender for a 43rd NAACP Image Award nomination for Literature. The Hollywood Bureau organizes the awards program, which is “the nation’s premier event celebrating the outstanding achievements and performances of people of color in the arts as well as those individuals or groups who promote social justice through their creative endeavors.” There are 53 award categories, spanning television, motion picture, recording and literature. Giving Back is vying for one of five nominations in the Outstanding Literary Work – Non-fiction category.

Receiving a nomination would brighten the spotlight on Black philanthropy and usher in exciting opportunities. I don’t know what our chances are for a nomination, but I do know that Giving Back has already overcome formidable odds, which leaves me optimistic. Without benefit of a publishing industry “machine” to promote the nomination, Charles, NGAAP-Charlotte and I are relying largely on friends, family and grassroots publicity to get the word out. Goodness knows, It’s worked wonders so far.

Here are things you can do to help Giving Back secure a nomination:

If Giving Back actually secures a nomination in January, then dues-paying NAACP members can vote (online, I think) for Giving Back. More on this later. First things first.

Whatever the outcome with the NAACP Image Awards, I’m thrilled and honored to share the stories, images and cultural legacy of Giving Back. — VF