“I was the conductor of the Underground Railroad for eight years, and I can say what most conductors can’t say — I never ran my train off the track and I never lost a passenger.” Harriet Tubman at a suffrage convention, NY, 1896

A favorable aspect of my work is collaborating with an eclectic mix of philanthropic institutions, cultural organizations, arts groups, businesses, schools and fascinating people around the world.

A current project involves the Harvey B. Gantt Center for African-American Arts + Culture and its new HERITAGE & HISTORY series funded by Duke Energy. The program series features nationally noted artists and scholars who are preserving Black culture through an array of disciplines and media.

KAREN JONES MEADOWS (of Karen Jones Meadows Now), an award-winning playwright, actress and educator, kicks off Heritage & History as the featured “culture keeper” in March—Women’s History Month. Once a Charlotte resident, Karen was a regular performer and creative force at the Afro-American Cultural Center (now the Gantt Center). She’s returning to the city to perform her one-woman play, Harriet’s Return: The Legendary Life of Harriet Tubman, which originated as a small project for the Afro-Am in the 1980s. Since then, Karen’s signature theatrical work, in which she plays 30+ characters, has evolved into a critically acclaimed production and phenomenon with stagings throughout the U.S. and internationally each year. 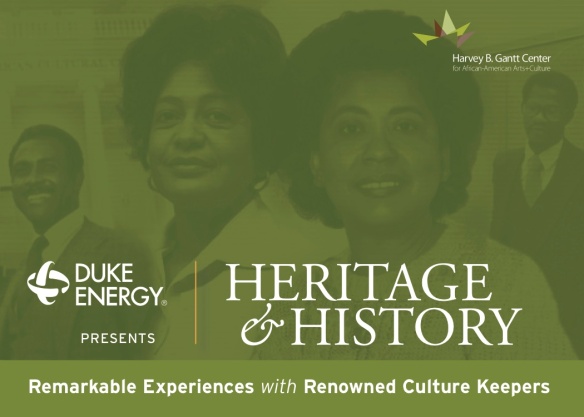